Owl update. On Friday the owl nest blew out of the tree. I walked on Saturday and spent some time looking for the owl baby, nada. That was in the morning.  I was told today that yesterday evening, Saturday, someone found the fledgeling and took it to Moore Lane Veterinarians and they took it to the Zoo, which is to send it to the Bozeman Raptor Center. This is all third party information, so I know nothing myself, but it is what I was told. That indeed was a big wind on Friday. Does anyone have solid information about what happened to the baby owls? 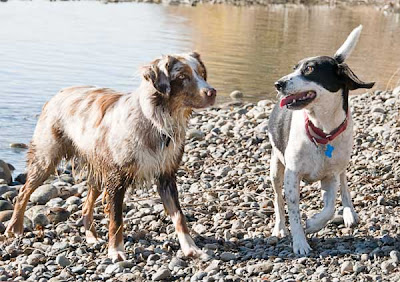 Choco and his friend Jersey. This photo was taken last fall.


Chocolate meets his old friend Jersey
Today we met Barb and her friend walking with a group of dogs, one of which was Chocolates very favorite friend Jersey.  I seldom see Chocolate make friends with other dogs, but he and Jersey just love each other. It is fun to watch. Chocolate said he hopes Barb will email me so we can arrange for him to see Jersey again.  They just ran and ran chasing one another, and this after we had already made two laps around the Island and Choco was exhausted.  It was great. Choco was so happy. 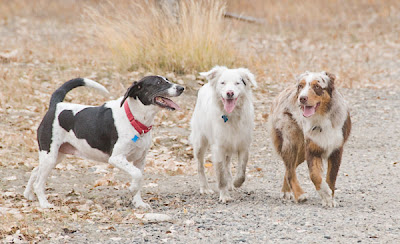 I believe this is when Jersey first met Choco and Blanca.

Outspoken Critics
I was told by two people that they encountered two very aggressive and rude runners on the Island today, who had not even been bothered by dogs but were aggressive anyway, kicking dogs and calling dog owners names. Unfortunate stuff. There are a few very vocal people advocating against dogs on Norm's Island. We, dog lovers and Norm's Island lovers need to keep on top of this.