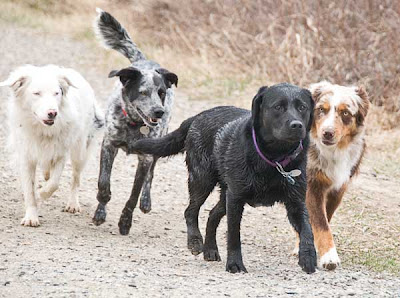 This beautiful Black Labrador has a distinct worried look on it's face.  No need, this is a very friendly crowd.  We did not get any names, and we are wondering if this beautiful dog is an English Lab?  Chocolate seems awfully interested.  Simon and Blanca are hanging together.  They are old friends, Simon and Blanca have played since she was a wee pup. 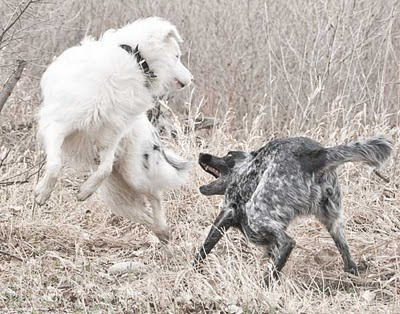 Blanca demonstrates her ability to fly, which is a necessary skill when playing with Simon.  I knocked down the saturation on this so you could see Blanca.  I seem to have an uncanny knack for having difficult to photograph dogs. Half the time you cannot see Blanca, she blends in, or fades away. My friend Boo was black and was a black hole for all light falling near her, so she was almost impossible to photograph unless I made her a gray dog.

I must say this.  As nice as it would be to have dog parks in Billings, and there should be at least one, most major cities have at least one dog park, dogs do not play like this in dog parks. Most of the dogs that play at Norms are there often enough to feel some freedom to express themselves, which is a beautiful thing to see. Being at Norms is like being in a wild place. It lifts the spirit. Wonderful.