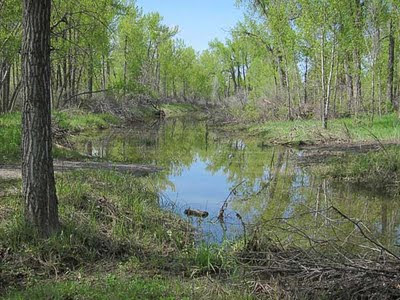 So here it is. The path in this photograph is under water, which is not usually the situation. The path is running left to right in the middle of the photo, or right to left if you are of the minority that walks clockwise. But, the question is: why Froggie.  Mike was photographing frogs here, and on the other side of the island, so I thought I might try my photo skills on the subject, so, here we have . . . 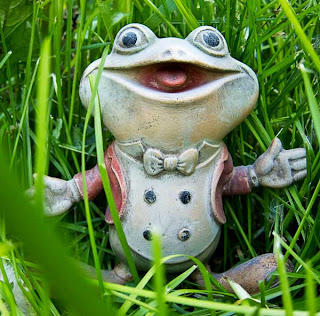 Hiya Kids, Hiya Hiya Hiya . . .
Froggy the Gremlin  (from Wikipedia, the free encyclopedia)   "Froggy the Gremlin was a character on the Smilin' Ed's Gang radio and TV show and later Andy's Gang TV show in the 1940s and 1950s.  Froggy was a troublemaker on the shows. He was known for being disrespectful of adult authority figures and enjoyed playing practical jokes and disrupting other guests, repeating two-word phrases ("you will, you will") and giving commands that the guests had to follow despite their efforts to resist."
My friend Craig gave me Froggy many years ago.  It had been a wedding present to him in 1978. Craig did not like stuff, so I got Froggy. I had a Froggy just like this one when I was a kid and was very enamored of him. He ended up under a pile of books, got kinda flat and dried out. Poor Froggy.
Froggy has a hole in his back, and if you put your thumb over the hole and squeeze him Froggy will express his attitude toward the world by sticking his tongue out. I think I always like this about him.