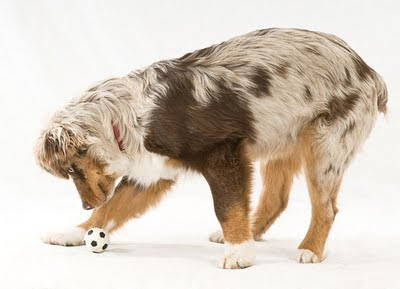 It has been reported*  that Fricken' Huge fish are swimming about on Norm Schoenthal Island, so the kids and I are staying in the neighborhood today. Don't want my cherished kids to be nibbled on by any Frickin' Huge fish.
So, in lieu of our usual Norm's photos, today we go to the backlog of studio photos.  Here we have our boy Chocolate examining what we could pretend is a Fricken' Huge fish.  It probably approximates what his reaction would be to a little fricken fish.  Chocolate here is six months old, the picture was taken March 14, 2010. One of the last sessions I did in my old studio.
*Kelley Gililland reported at 10:30 tuesday that: "So walking at Norm's is a little bit wetter...a little more flooded. To put it simply.....I saw a VERY large fish swim across the trail! When I say large I mean Fricken Huge!"

Is he not the cutest boy.  He is really a teddy bear, with a beating heart. He had better be cute, he was sick last night and pooped all about the house.  I guess the wax in my ears caused me not to hear him ask to go out, Chocolate?  I was feeling so confident in his being totally house broke. They say you cannot be totally reliant on a dog being house broke till they are two. Touch wood, but Nina Blanca has never failed me, excepting the night I brought her home, Christmas 2009.
"Yah, your always telling everybody how great Blanca is, agh!!" says Chocolate.