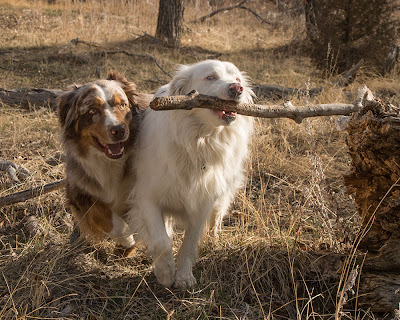 We have been spending long hours at the Island the last few days, it is gorgeous, absolutely gorgeous.  It is kinda worrisome that it is so warm so early, but we are enjoying it.  The negatives of course are we are already doing tick inspections several times a walk, and I am feeling ticks on me all the time.  So far we have not found any, just fantom ticks.
My fans have probably given up on my ever posting anything again on this blog, well fans, here it is.
Blanca cares little for sticks, unless of course Choco has one. She takes them from the softie all the time.  He seems to be content with his role in life and does not fight it.
I like how the light is bouncing off Blanca and lighting the end of the log. 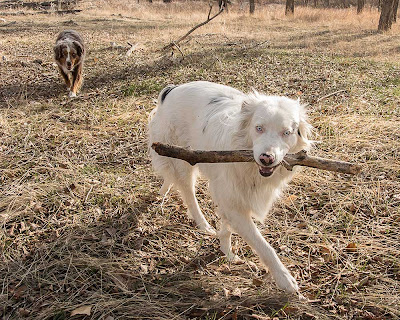 Blanca is smart, I cannot get Chocolate to carry sticks at the middle. He has a strong preference for the ends, probably because they are where he likes to chew. 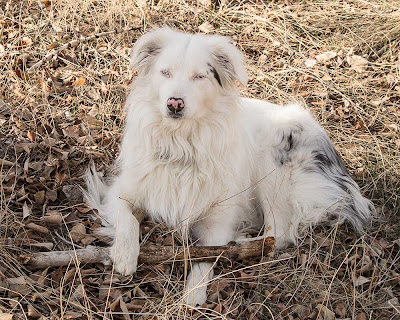 Linda calls Blanca Princess, suggesting that I favor her.  Ha! no way.  Do you think?  She will walk away from this stick is 7 seconds and Chocolate will come and get it. 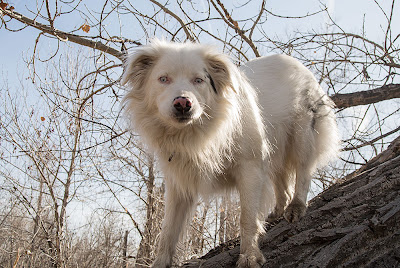 Princess, opps, I mean Blanca, up a tree.  We have been working on walking on logs.  This one is at 45 degrees, and they all three will go up it, it has bark and it is big.  Blanca will walk on most anything, as will Finnegan, but Chocolate usually will go around, no matter how many obstacles he has to negotiate.
This photo shows one of the issues with Blanca's eyes.  They are set low in her eyeball.  This, with limited function of her pupils, restricts her sight.  Wish they had eye charts for dogs so we could tell how much.
Looks like this has turned into Nina Blanca's post.  We had a wonderful time at Norm's.