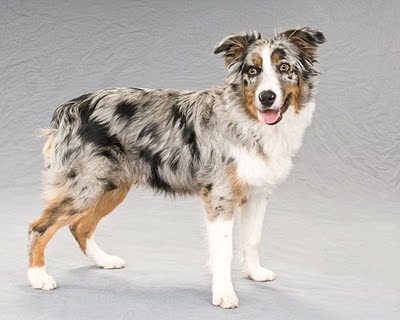 This is Winslide's Texas Beau, Chocolate and Blanca's daddy.  He is about 7 months in this picture. Beau is an offspring of HOF WTCH HTCH Twin Oaks Winslow Breeze - Winslow's website - http://www.winslide.net/winslow.htm.   He was about a year and a half when Chocolate Blanca were born. He is a beauty. Chocolate's full name is TRose's Chocolate Dulce de Leche.  Blanca is just Niña Blanca, I like that. White Girl. Tootin the pedigree horn there, but my kids don't have any herding in them, Choco says "herd cows, you must be kidding" and Blanca would herd to her own horn, being deaf.
Today was too cold for me, plus I had stuff I had to get done, so we did not go to the Island.  Boooo say the kids. Unfortunately it is going to be worse tomorrow and Friday.  We may have to brave the cold one of those days, even for just a short while.