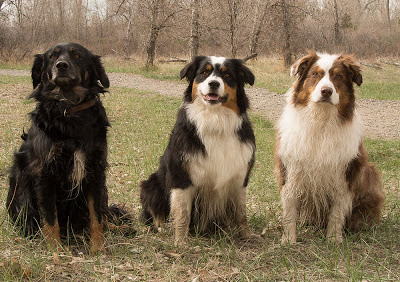 Rolo, Selkie and Bally.  My kids and I really like these three.  It lends one to wonder if dogs have a preference for other dogs of the same breed, or if it is just that the temperament of these guys and gal are amenable to Choco and Blanca.  Blanca will even play with them, and she seldom plays with other dogs, except for Chocolate, who she considers her chew toy, and Finnegan, who irritates her till she has no choice.
Rolo, Selkie and Bally walk at Norm's most mornings with their peep Kay.  We enjoy all four of them. 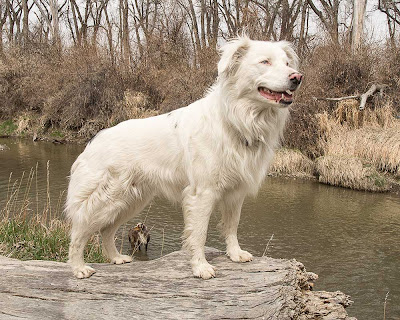 We have been working on walking on objects, Blanca has no qualms at all, Finnegan will do most things with some coaxing, Chocolate gets as far away as he can, like in this case to the middle of the slough.  This is a nice subtle picture of both of my kids. Mike Garcia is making funny faces at Blanca, thus her rapt attention.  Choco would prefer he be throwing sticks.