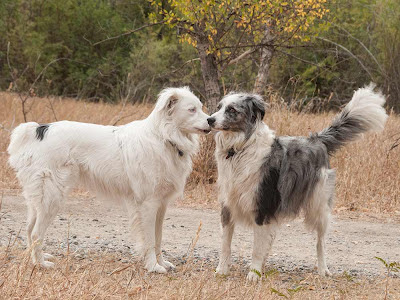 I thought that maybe it would be a good idea to start the month of October off on the correct foot and  . . .  Post.  I have been negligent.
This is one of Blanca's favorite friends, Bozzy.  He and Blanca are very similar, same build, same movements, same shape heads, the colour is the only difference. Oh yeah, the tail.  Bozzy has the most magnificent tail. It would be cool if Blanca had one, a tail. But then, as I think about how much work it is keeping her bum clean, maybe no tail is good.
I love this picture.  Bozzy is a beautiful boy. Of course you all know what I think of my Nina Blanca.