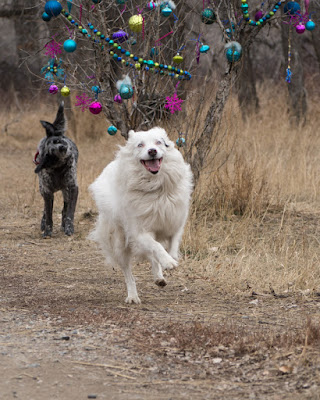 Today we walked with Blanca's favorite dog in the world (after Choco), Simon.  That is him shakin under the Christmas Tree.  Simon walks with his peep Pat, who is one of a very select group of women Blanca thinks are the cat's meow.  When Blanca was a wee pup Pat would bring Simon over to our house for play dates.  Blanca loved it.  So when she sees either Pat or Simon, she is besides herself with joy.  She was a Happy White Girl today. 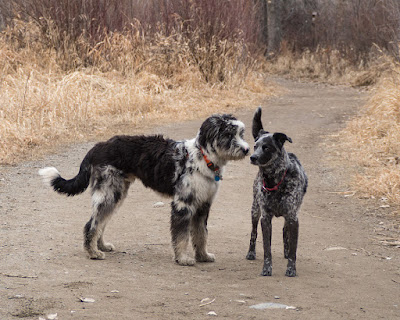 We have made a new friend at Norm's, Bernie.  He walks with his friend Lenny.  They did two, at least, laps today as we saw them twice.  Lenny has had Bernie three weeks and it looks like he is doing really swell.  Bernie and Simon discuss the different flavors of salt and pepper.  The first time we saw Bernie Blanca gave him a hard time, he is a runner which is not allowed around The Princess.