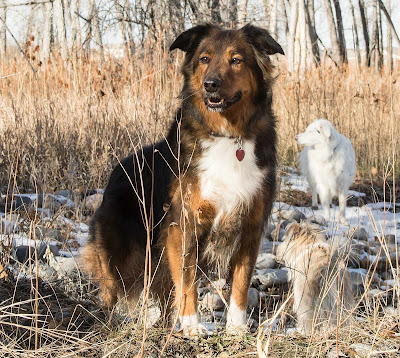 Absolutely gorgeous day at Norm Schoenthal Island today.  We walked with our new friend Halle, shown above, and her peeps Ivy and Morrison.  We had a wonderful time taking pictures and talking photography and getting a little muddy, but not too much.
Halle seems to be at least partly Spanish Shepherd (aussie) though she could be part English, or Border Collie.  Some kind of English farm dog I would say.  She has a nice personality and was accepted by Blanca, which is of course important.  She and Finny played some, though I had the impression Halle mostly thought him a pest.
We had fair lighting today, the clouds were sparse but did their job often enough.  The photo above is pretty hard light but the conditions are perfect, so no problem.