Focus? Who Cares, it's Snowing. 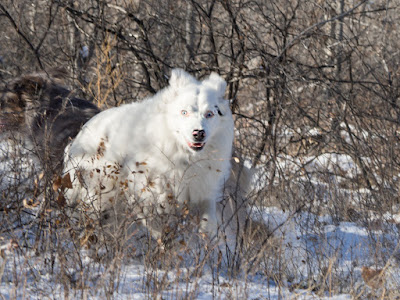 It has been a really long time since we have tried this. I am using my new (newer) Olympus OM-D 10, which I have never tried doing this with before. It does not have the focus speed that my usual Nikons have, but then, nor do I. I made some mistakes, next time I will try to fix them. The camera has a quadzillion settings, so getting them all set right is one big issue.

This one came out pretty good. You can see Blanca on the left. They are running around a group of bushes. The camera will not follow focus, tracking, so I have to plan to get the photo at a predesignated spot. I have done this before and can get pretty good at it, as long as I know the routine of the chase. I did most of these with the shutter too slow. Been awhile. 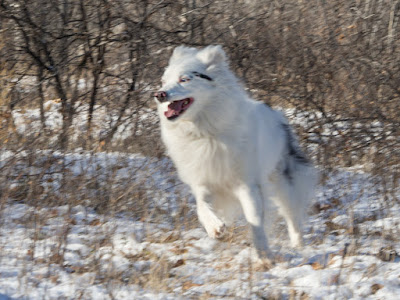 They come running at each other, it looks like for sure they are gonna collide, but they just slide by one another. They do not chase, but run in opposite directions. Sometimes they will do this for 15 minutes, but only in the winter. 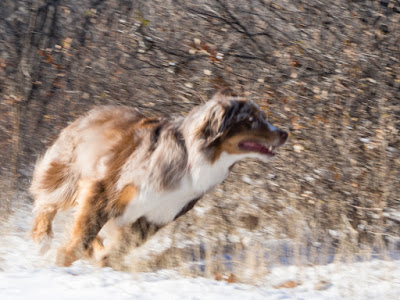 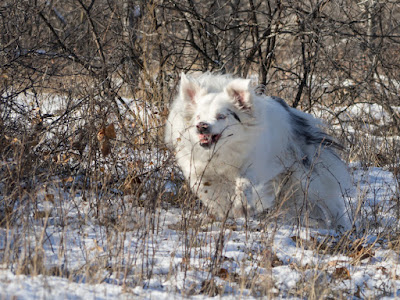 I am hesitant to post this, Blanca looks so vicious. But it is all in the game. She thinks that Choco is her chew toy. He puts up with it, to a point. He has 10 pounds on her, not that it does him much good. She has 50 pounds of attitude on him.
They had an absolute riot. They love the snow. I enjoyed myself too. I love my kids.