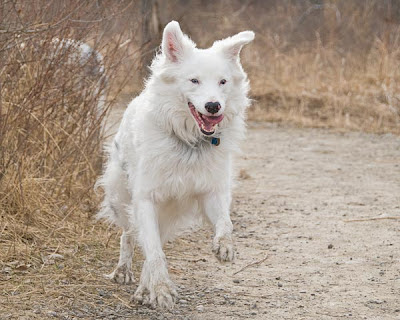 For several weeks people at Norm's have been saying to me "we saw Blanca walking with someone else".  No way.  Finally last week the mystery was solved.  We met Kiva.  It is easy to understand how people thought it was Blanca.  They look amazingly alike.  Kiva has a little more color, mostly grey, she has a black nose, and her eye rims are not as pink as Blancas. Kiva has more hair, and it is curly.  But what is more amazing than that they look so similar is that they move and act so much the same.  Even I and Kiva's peep must take a second look to see who is who. Amazing.  We are so happy that we finally were able to meet Kiva. 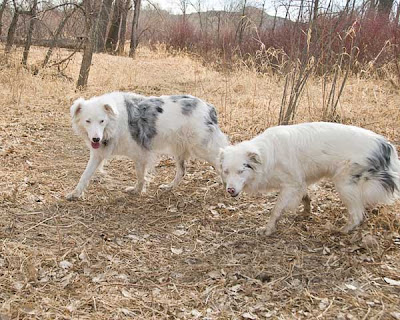 I tried, I really tried, but this is the best I could get of them standing next to each other.  It does give an idea of their similarity.  Kiva can hear, at least in one ear, so she moves her ears more.  Blanca keeps her ears back all the time, they never move.  I have more pictures to post, but I am quiting for now.  Come back, I will try to do it tomorrow.